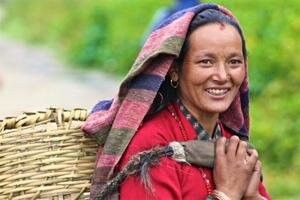 Forest communities are particularly poor. PHOTO: Natalie Bailey/IRINCommunities “cannot make [the] best use of their available resources because of the restrictions imposed and a complicated process of getting approval for harvesting of any timber and non-timber forest products,” said Ganga Ram Dahal of the Rights and Resources Initiative (RRI), a global coalition promoting forest land tenure reform.

The challenge is“safeguarding the rights” of communities, Bharat Pokharel, forester and deputy country programme director in Nepal for the Swiss development agency Helvetas, explained at a recent regional workshop on forestland tenure held in the capital, Kathmandu.

According to the UN Food and Agriculture Organization, heavy deforestation began in the 1950s due to politics, poor management and socio-economic pressures.

In 1964, forests covered more than 45 percent of Nepal’s total land area, while today that figure is closer to 29 percent, according to Nepal’s Department of Forest Research and Survey.

Despite this, many experts believe a trend of forest degradation is slowly being reversed through the involvement of local communities and the development of more sustainable policies.

In the late 1980s, as part of a major conservation effort, the government began handing over some public forests to local communities for management, protection and utilization.

Today, community forestry covers 1.6 million hectares, or a quarter of all forestland in Nepal, mostly in the country’s mid-hills, which are squeezed between the mountainous north and the southern plains. Some 18,000 associations known as community forest user groups (CFUGs), made up of more than two million households, manage these areas.

These CFUGs have contributed to significant improvements in forest growth, Helvetas reported in 2011. “But economic benefits to local communities are yet to be realized,” the organization’s forest tenure assessment said.

Initially, the main goal of CFUGs was to protect and rehabilitate depleted forests, supporting only the “subsistence needs” of communities, a 2009 paper in Nepal’s Journal of Forest and Livelihood indicated.

Communities were able to remove dying trees and cut branches for subsistence-level economic activity, such as selling firewood, but as the forests matured, their “full productive potential” went underutilized.

As a result, the focus on conservation needs to shift, said Krishna Chandra Paudel, secretary at the Ministry of Forest and Soil Conservation, who calls for government-assisted commercialization of community forests.

While many in the government argue that regulation is still needed to ensure the country does not backtrack on decades of forest rehabilitation, forest tenure experts say overly strict oversight threatens community rights.

Communities are supposed to be fully in charge of forest resources, but in practice all user-groups must inform district forest officers of timber sales and transport, and acquire advance transport approval at check posts, according to Anupama Mahat, a consultant at RRI.

More recently, the government proposed amendments to the Forest Act of 1993 that would reduce user-group autonomy, according to a 2012 policy note by the local think tank Forest Action. Many amendment provisions are intended to discourage timber sales, reducing community income from the forests and hampering local development, the paper said.

Meanwhile, civil society’s opposition to the proposed amendments, as well as the recent dissolution of parliament following its failure to produce a draft constitution, have stalled further legislative action.

The Ministry of Forest and Soil Conservation’s Paudel insists the government is not encroaching the autonomy of community groups, but is trying to prevent illegal logging, unsustainable lumber harvesting and overall corruption in forest management in order to preserve forests and livelihoods.

The prospect of earning cash from “reducing emissions from deforestation and degradation”(REDD+) - a proposed mechanism under the UN Framework Convention on Climate Change that aims to halt and reverse forest loss - has boosted the demand for more local rights.

The currently stalled constitution-drafting process offers an opportunity to protect these rights with “strong legal instruments and, ultimately, a constitutional guarantee,” noted Mahat.