She Rises from the Ashes

Did you know? Usually regarded as female, the phoenix was also once used to denote outstanding men in China.

European cultures have just a vague notion of the phoenix, that it’s a mythological bird reborn in fire. West Asia has a more specific notion: the phoenix is a bird associated with fire, but has its rebirth on the tree of life, which happens to be a palm (the tree of life design frequently appears in Persian rugs).

But you have to go to Chinese mythology to get a self-contained story that has apparently the same mythological origin: the daughter of Emperor Yan the fire god died early (for various different reasons in different versions of the story) but returned to life on the mulberry, the Chinese tree of life, in the form of a bird. However, this bird, in some stories called Jingwei, in others supposed to be a stork, is never called phoenix.

We therefore have three fragments of legends derived from ancient orally transmitted tales whose original version could no longer be recovered, and in China, an altogether separate set of traditions has arisen relating to this magical bird called phoenix, divine but unrelated to fire or tree of life.

In fact, the specific name “phoenix” seldom appears in Chinese mythological tales, whereas the dragon appeared early in totemic and shamanistic worship, while specific birds like the swallow were totemic and the sun was believed to be a golden crow, the phoenix legend had a later appearance, in the age of Shun and Shang, i.e., around 2000BC, as the divine animal associated with wind (whereas the dragon was associated with water/thunder) and the messenger from heaven.

“Descent of the Phoenix” was part of a ceremony in which, after the playing of the nine divine tunes, the Shun tribe’s chief, wearing a feather headdress, would appear on stage to receive the acknowledgement and submission of his subjects. It thus had a different status to the tribe that worshiped it compared to the status of the dragon in tribes that considered themselves to be its descendants, an expression that is occasionally used even today, while it is almost unheard of for a Chinese to call himself “descendant of the phoenix”.

The Yellow Emperor or some other ruler was said to have the phoenix descend on him as reward for sage rule or divine devotion, but these were more moral tales rather than historical event descriptions.

To find the origin of the concept of phoenix, it is necessary to go back to its earliest representation in ancient artifacts left behind by our ancestors from whom we have no written records. Instead, we have to rely on objects made from long-lasting material such as pottery or stone.

The following is a jade representation of the phoenix from the neolithic era, with some later adaptations.

The overall idea remains: a crowned bird with elaborate long tail feathers but comparatively simple wings in a side profile. The look of the phoenix would seem to be based on the pheasant, not on predator birds like the eagle or owl, for which the jade representations tend to be frontal emphasizing the open wingspan.

While current Chinese literary references to the phoenix have a female connotation, in contrast to the male connotation of dragon, this is a relatively recent custom, perhaps from Tang dynasty onward. In Han times, both dragon and phoenix were both used to denote an outstanding man, with perhaps a slight bias towards power for the dragon and the phoenix, for subtlety. In the novel “Three Kingdoms”, for example, the expressions respectively refer to Liu Bei’s two advisors Zhuge Liang and Pang Tong; the former known as Crouching Dragon for supposedly being a hermit before joining Liu Bei’s team, the latter as Phoenix Chick for being the younger son in his family.

The Spring-Autumn/Warring States Chu region has perhaps the largest collection of artistic representations of the phoenix, a tradition that appears to have been inherited from the Shangs. We see many such expressions in figures weaved or printed on silk, or drawn on/sculptured into lacquer; in particular, there are figures showing the dragon and the phoenix guiding the spirit of a dead person to heaven, and a phoenix fighting with and defeating dragons and tigers. The following diagrams provide a sample of objects discovered in tombs of the era: 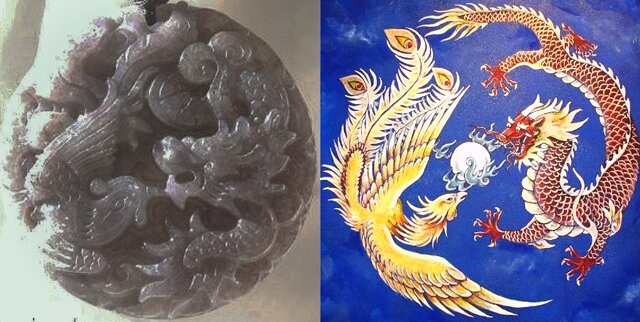 This post was originally published in June 2010 on See China, where you can find more images of the phoenix.