A seven meter tall carnivorous plant, a fish with vampire fangs, and a frog that sounds like a cricket are among 145 new species described last year in the Greater Mekong, reaffirming the region as one of the most significant biological hotspots on the planet ahead of the UN Convention on Biological Diversity (CBD) in Nagoya, Japan.

New Blood: Greater Mekong new species discoveries 2009, reveals an average of three new species recorded by science each week including Asia’s only bald songbird the Bare-faced bulbul and the uniquely adapted Sucker-fish, which uses its body to sucker onto rocks in fast flowing waters to move upstream.

The report says while these discoveries highlight the Greater Mekong’s immense biodiversity it also pinpoints the fragility of this region’s diverse habitats and species. The likely local extinction of the Javan rhino in Vietnam is one tragic indicator of the decline of biodiversity in recent times.

How these new species were discovered in this region that includes Cambodia, Laos, Myanmar, Thailand, Vietnam and the southern province of Yunnan in China is as bizarre as some of their traits.

The report highlights the opportunity for governments of the Greater Mekong to use financing through the Global Environment Facility (GEF), the global financing mechanism for the CBD, to leverage large-scale resources to conserve species, biodiversity and healthy ecosystems across the region.

The above is an excerpt from the WWF New Blood report.

First seen by scientists over 15 years ago, the Bare-Faced Bulbul has evaded discovery due to its remote location and seemingly outrageous appearance. It is only known to live in the sparse, deciduous forest on limestone karsts in central Laos, where it was originally discovered.

The species is distinguished from other bulbuls by its appearance and vocalizations. Unlike other species, Bare-Faced Bulbul lacks feathering on the face and the side of the head, and has extensive pale blue skin on the rear of the head and around the eyes. Its most common vocalizations consist of “a short series of whistled, dry bubbling notes”.

The bird is the first bulbul discovered in Asia in a century, and is Asia’s only known species of bald songbird.

A new species of venomous pitviper was recorded in karst region in Trung Khanh Nature Reserve, Cao Bang Province in northeastern Vietnam. According to scientists, the pitviper Protobothrops trungkhanhensis is an extremely small size for the Protobothrops genus, measuring 70cm in length. Both males and females of the species are grayish-brown with dark-brown patterns. The coloration perfectly camouflages these snakes on karst rocks covered by various plants and tree waste.

Three of the five mammal species newly described in 2009 were white-toothed-shrews. Crocidura annamitensis was first seen in Vietnam in 1989. However, because it was caught in the same area at about the same time as the striped rabbit and Saola, it caused little excitement within the scientific community. However, after the scientists set to work examining their samples. And, over ten years later, they have finally been described as new mammal discoveries.

While walking through a forest of greenery, the Nepenthes bokorensis is a sight to behold. With a climbing length of up to 7m, this species produces pitchers that are a green with accents of a startling shade of bright red. The pitchers alone can be up to 25cm in length, and are used to trap ants and other insects, which are then broken down to provide nourishment to the plant.

The plant also has broad green leaves, yellow stems, and faint purple blotching all over. The root of this plant has traditionally been boiled and given to pregnant women to ease their pains.

One of the 26 fish that were newly described in 2009, the Danio tinwini was found in the upper reaches of the Mogaung Chaung River in Myanmar. It is a small fish, less than 24mm long, that fits well with other species of the Danio genus. However, it does exhibit done difference that puts it apart: its spots! While other known Danio species have stripes extending the length of their skeleton, the Danio tinwini is completely spotted instead. The Spotted Danio Fish may also be found elsewhere in Myanmar, and its exact range is subject for further investigation. 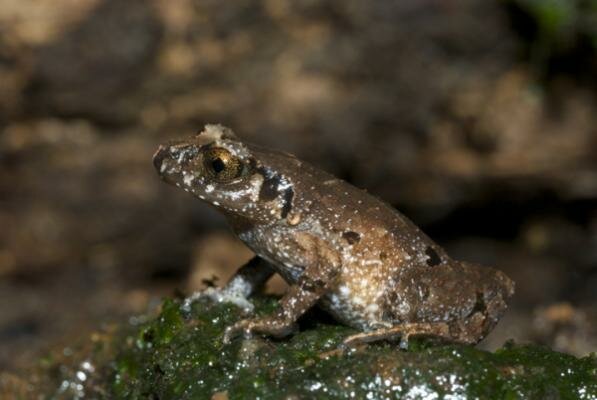 First encountered in the Quang Nam Province of Vietnam, the new frog species Leptolalax applebyi was nearly overlooked. It was not seen but rather heard, making a faint call that sounded like a cricket. According to the principle discoverer, “everyone on the trip was convinced the faint rasping noise coming from the leaf litter was a cricket, and I wasn’t sure at all. After recording the call, I began to hunt for whatever was making the noise- insect or frog - and after maybe 5 minutes on searching through the leaf litter, I was pretty convinced myself that it was a cricket after all. Shortly after that, I found the tiny brown frog hidden in the leaf litter.”

Until 2009, only one species of Oreoglanis catfish had ever been recorded in Thailand. However, after a ground-breaking study this past year, that number has now been increased to almost ten! These discoveries are a true testament to the depth of untapped biodiversity in the Greater Mekong region, and especially it its waters. The ranges of these new Oreoglanis species are yet unknown, although they are suspected to be limited to endemic to the sites in which they were discovered. Studies are also underway to determine whether similarly diverse Oreoglanis populations exist elsewhere in the region.

One of ten reptiles newly described in the region in 2009, the Coluberoelaps nguyenvansangi introduces not only a new species to science, but a new genus as well. Scientifically known as a dwarf fossorial snake, this cryptic species is very small and rare. Like most Elapid snakes, it is thin with dark blue sides and a narrow dark band along the spine. However, it is missing the venom and fangs that characterize elapid snakes and make them so dangerous. This new Coluberoelaps genus has thus been categorized as part of the colubrid snake family, despite its differing appearance.

A recent scientific study highlighted that amphibians and reptiles will be adversely affected by projected rapid changes in climate in the coming decades, with those in the Greater Mekong being put under the most pressure in Southeast Asia. Because higher ground for species to migrate to does not exist in the region, scientists believe that climate changes will exceed the ability of lowland species to adapt and as a result many will become extinct.

Preparing for a climate-changing region

Climate change will profoundly affect the Greater Mekong region’s biodiversity and ecosystem services, and as a result the millions of people who depend on them. The region is already warming and experiencing more extreme floods, droughts, and storms as a result of shifting whether patterns. As the impacts of climate change increase, ‘free’ ecosystem services including food, timber and non- timber forest products, water, pharmaceuticals, energy (hydropower, biomass fuels), carbon sequestration and climate regulation, purification of water and air, will become significantly more valuable.

Ten new species within the Strobilanthes genus were newly described in the Greater Mekong region in November 2009. They were discovered in Laos, Myanmar, Thailand and Yunnan, in areas as diverse as dense forests and highway medians.

These species are known for their unique flowers and social growth patterns; always growing in large numbers very close together. However, this does not make them noticeable to the untrained eye, as they spend the majority of their lifecycle in a flowerless state.

Strobilanthes species are “rarely collected by visiting botanists unless present at flowering time although they are usually well-known to local communities who often have traditions of the kind of year when mass flowering occurs, associating with unusual drought or high crop yields or some other event.”