Are You Being Brainwashed?

Fear-mongering, war-mongering, excessive patriotism… Here’s a look at how right-wingers in India, Pakistan and the USA create a climate of fear and suspicion to win votes.

I am often amazed at the spectacular achievements of right-wingers. If you closely follow the liberal or leftist section of society, you will notice healthy debate, discussion, war of ideas and disagreements on many topics. But on the other side of the spectrum, the things that you will notice are quite different. Misinformation, denial, fear-mongering, war-mongering, excessive patriotism while hating a section of countrymen based on religion, race, caste, etc. are the hallmarks of "the other side", i.e. right-wingers. While misinformation exists among the left as well, it’s almost never mixed with excessive fear, unlike with the right.

If you follow the right-wingers closely (including new age media like blogs, Internet discussion forums, etc.) in countries like India, Pakistan, USA, you will notice a surprising trend. They all operate exactly in the same fashion. Same modus operandi everywhere. Let’s analyse:

"Hindus are the most docile, most peaceful, most tolerant, most noble and most progressive people in the whole world."

The biggest worry among the Indian right-wing is that "Hinduism is in danger". Their main talking points are that "Muslims are taking over India", "Christian missionaries are converting everyone", "politicians favour the Muslims" and the corresponding need to "protect" Hinduism, need to "protect" India, etc.

After more than 1,000 years in India, Muslims make up only 14% of India's population. Only they know how Muslims will take over India. The case of Christians in India is even more curious.

After more than 2,000 years in India, Christians make up only 2.3% of India's population. Still these right-wingers believe that somehow they are converting everyone and also how India's liberal side of the media is somehow controlled by "Christians". Ironically, many of them are the "products" of missionary school education. Not only these, they constantly believe "Pakistan is playing a better game”, "Pakistan is terrorizing India", Pakistan is "interfering in India", "ISI is superior", "China-Pakistan nexus is out to screw India" etc, etc.

Another thing they fear most is "communism/socialism". Simply because socialism/communism strikes at the heart of the power structure of any society. Obviously, no one likes erosion of power. This takes special importance for India, since most of the right-wingers in India are from the privileged "educated" classes, i.e. middle and upper classes of Indian society. 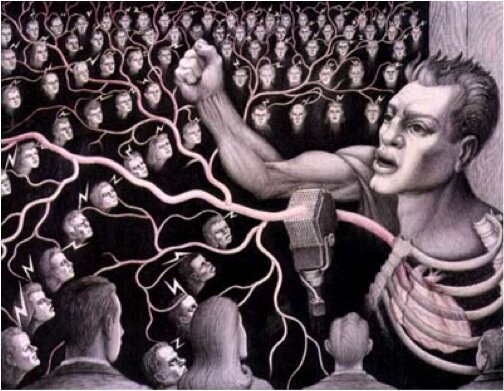 "Sunni Muslims are the greatest specimen of humanity. They are the best in everything. No Sunni Muslim can do terrorism. A great conspiracy is going on against Islam."

The biggest worry of Pakistani right-wing is that "Islam is in danger"; their main talking points are: there is a great "Hindu-Jew-Christian" conspiracy going on to subjugate Muslim countries, Pakistanis are increasingly going away from the "true path of Islam" and "Ahmadiyya community is conspiring to convert everyone" . They somehow link each and every terrorist attack within Pakistan to "Hindus, Jews or Ahmadis". Not just ordinary man on the streets but also people high up in the government and even judges say the same thing albeit with words like "external hands" etc . RAW, Mossad , CIA are probably the most common words among Pakistani right. Some of their most persistent talking points are "India is playing a better game", "India is encircling Pakistan", "India is interfering in Pakistan", "RAW is plotting", "India-Israel-USA nexus is out to screw Pakistan" etc . Many even consider Indian television programs as an "Indian ploy" to distract Pakistani youths from Islam.

This excessive fear makes them feel the need to "protect" Islam, "protect" Pakistan.

Many liberal, progressive Pakistani blogs like Pak Tea House, repeatedly comes under right-wing attack and are often labelled as "agents" of foreign/anti-Islam forces.

"USA is the greatest force for good in this world. America can do no wrong. America is by far the best in the world in terms of human rights. America is the natural leader. Mind it "White Christian" America. American way of life in defined by Capitalism and Market is our second God."

The main talking points among the right-wing Americans are the following:

1) World is full of Anti-Americans.

2) The biggest problem in USA is: Government and Taxes.

3) Christianity is in danger.

4) White race is in danger.

5) Blame the immigrants for all troubles even though USA is a nation of immigrants.

6) Obama is a Socialist, Marxist and a Kenyan and is determined to destroy American way of life.

7) Muslims are slowly talking over America.

8) Need to be armed with guns in case dictatorship (too much government) comes to USA.

If you exert your mind, you will notice some serious similarity in all these cases:-

1) Each group thinks that somehow their community is in "danger".

2) Each group thinks that they are the best, the most noble, the most peaceful and everybody else is out to destroy them!

3) Xenophobia. A constant fear of getting screwed by foreigners especially of certain countries.

4) Religious hatred for a section of their countrymen, i.e. minorities while shouting patriotic slogans.

5) Excessive fear of losing their dominating position in society.

6) Hence the need to preserve or "protect" their importance.