A Story in a Sandcastle

LIM JIN LI
*Special to asia!
Comments
Tweet
-A +A

asia! sits down with the director and lead actor of "Sandcastle" - fresh from the Cannes Film Festival and premiering in Singapore this August - for a conversation about history, films, passion and art.

Director Boo Junfeng may not have said it, but his debut feature film “Sandcastle” is, in a way, itself a parallel to the coming-of-age story that it seeks to portray. Already the winner of a number of awards*, including Best Film (2005, 2007) and Best Director (2007) at the Singapore International Film Festival, and nomination to the Asian Film Academy (2005) and the Berlin Film Festival (2009), Boo has been on the list of young Asian filmmakers to watch out for, for a while.

Earlier this year though, he crossed a new threshold: “Sandcastle” premiered at the International Critics' Week (ICW) at the Cannes Film Festival, in competition for the Camera d'Or. In so doing, Boo joined a long list of film industry luminaries (including maverick Hong Kong director Wong Kar Wai) who made their mark at the ICW. Not a bad debut at all for this 26-year-old from Singapore, who describes his motivation simply as “my love for making films”.

To be sure, Boo never quite describes his experience as a coming-of-age, but in a recent conversation with the director (and Joshua Tan, the lead actor of “Sandcastle”), it was reasonably hard to not come away with that feeling. Describing the biggest challenge in the moviemaking process as writing, Boo informs me that “making short films and telling bite sized stories is very different from sustaining the attention of the audience for a full-length feature film”; and hence, writing, and “understanding a narrative structure” is really a “craft on its own”. I wouldn’t know anything about that but he cheerfully admits that had circumstances permitted, he would have taken “three years” to make his debut feature, acknowledging that the “constant sense of urgency” so typical of Singapore had demanded that the film be made in the time he had.

Singapore, or rather, an intrinsically Singaporean concern seems to colour this film with an amalgamation of scenes from National Service (or, mandatory military conscription), Singapore schools, urban settings, and yes, even re-interpreted versions of Singaporean National songs. Yet, inasmuch as the setting, or what the director calls the “back story” of the movie is to do with a son’s discovery of his late father’s political activity in the troubled times of the 1950s and 1960s on what we perhaps might call the left side of the political spectrum, Boo reiterates that he is not trying to achieve some larger socio-political agenda.

His shorter films might have dealt with some sensitive issues in conservative Singapore (see “Tanjong Rhu”’s discussion of homosexuality in Singapore), but Boo’s driving concern, it seems, is to tell stories based on “themes that interest [him]”, rather than provoke a reaction. Accusations of the latter are, he says, a result of the media’s tendency to “hype these things up”, noting “it’s the angle they picked up on”.

For “Sandcastle”, Boo drew his inspiration from his research into the accounts of the Chinese-educated from the 1950s and 1960s of the political troubles. In seeking to understand the “passion and fervour” of the Chinese students and “their convictions and their beliefs”,’ he discovered a version of Singapore’s history that has “rarely been heard”. He describes how he looked at photographs of young teenagers, who at 14 and 15 years old would “organise rallies and make themselves heard”, something which Boo juxtaposed with the youth of today whose “apathy”, in contrast, is stark. That, it seems, was his inspiration for “Sandcastle”, and regardless of how others may perceive his agenda to be, he is clear that “it is simply a story... anchored in the past” but “that is what it is, a back story”.

In our Youtube and digital camera (let alone mobile phone) era, filmmaking has become easy, but while anyone can record a video, can everyone tell a story? Based on his CV alone, you would infer that Boo Junfeng is a gifted filmmaker, but above and beyond that, he is a talented story-teller, and as the young man in “Sandcastle” comes of age, so too does Boo’s story. 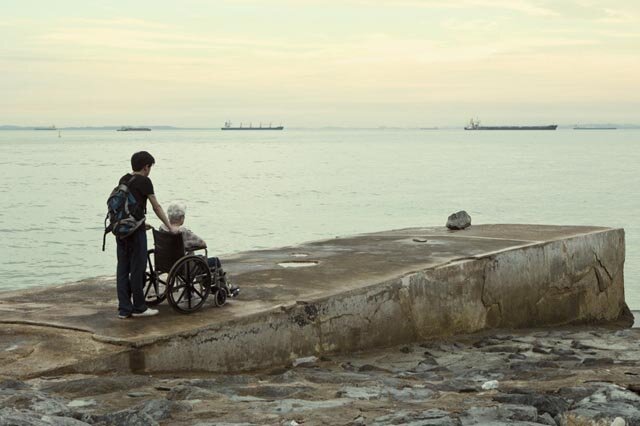 En (Joshua Tan) pieces together his family's past lest it be washed away by the tides of time.

Lim Jin Li is (among other things) a post-graduate student in History at the London School of Economics and Political Science.