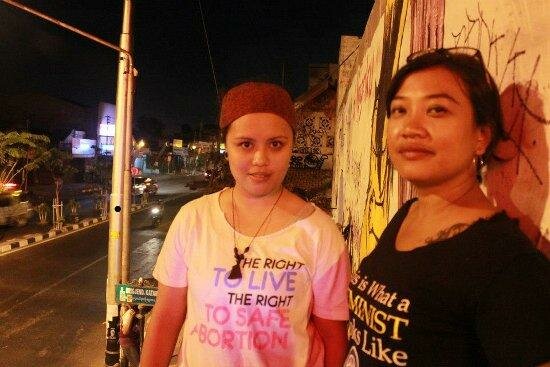 At the global day of action for safe and legal abortion, 28 September 2012, in Yogyakarta. Activists participated in a street campaign and mural art - Samsara. PHOTO: Inna Hudaya

I was 22 years old when I had an abortion at six weeks. The abortion took place in a hotel room in Solo, Central Java. A lady in her fifties performed the procedure; I had never met her before and I still do not know her name. It was a confronting situation to open my legs and let her place her hands in my vagina without even knowing who she was. Stressed, and without any pain killer, I could feel my vagina tightening, but I had to hold the pain.

After it was over, I handed her an envelope with the money inside. Transaction completed. I had no right to ask any more of her. As long as she performed the abortion I needed, that was as much as I could hope for.

A few years later, in 2007, I started a blog that shared my abortion experience and related how I had recovered from it. I began to receive many emails from women all over Indonesia whose experiences were similar. Today, five years later this blog is the first page that comes up in a google search when women in Indonesia look for information about the choices they might make when dealing with an unplanned pregnancy and seeking a safe abortion.

It turns out I was far from alone. Women all around Indonesia face great difficulties in getting access to safe abortion, and in dealing with the aftermath of their ability, or inability, to access the procedure. Many people blame us (women) for this situation. They say we are stupid for having unsafe sex leading to pregnancy. But in fact, the sources of the problem go much deeper. I would like to challenge all of us to go beyond the personal, and start examining the social, political and legal dimensions that lead so many Indonesian women into dangerous, stressful and damaging experiences with reproductive health. The problems start with Indonesian law.

Article 75 of the Health Law of 2009, states that abortion is illegal except in a limited number of cases including when pregnancy endangers the mother, when the foetus shows signs of abnormality such that it would be unlikely to survive outside the womb, and when the pregnancy is the result of rape. Anyone who has an induced abortion for other reasons can be punished by up to 10 years imprisonment, or a fine of up to one billion rupiah (approximately US$ 105,000).

The law adds a critical qualification: abortions meeting this narrow set of criteria can only be performed before the sixth week of pregnancy. In addition, women seeking an abortion should go through a process of counseling; the procedure should be carried out by a certified and authorised medical practitioner. Women also need the permission of their husband, except in cases of rape.

In short, though the law appears as if it expands access to safe abortion when compared to the preceding law it is so restrictive that it effectively makes it impossible in most cases. Many women do not even know they are pregnant until after six weeks, and, as the law is written, it even suggests that abortion in cases of rape cannot happen after this time frame. The law ignores the interests of most women who might seek an abortion. Most importantly, it fails to see women as empowered individuals capable of making decisions about their own lives. And to make matters worse, despite the law’s ambiguities, there is still no implementing regulation which might provide a more clear set of guidelines.

One of the many problems with the law is that it assumes that all women wanting an abortion will be married. In this respect, it is like most laws and policies related to sexual and reproductive health services in Indonesia, which target only couples or married women.

Yet every year in Indonesia, many young, unmarried women become pregnant. The reality for many of these young women who experience an unplanned pregnancy is that they will have diminished access to education, health and employment. Young girls who become pregnant are often forced to marry, even though they may not have been planning to start a family. Becoming economically dependent, many such women end up powerless and stuck in unhealthy relationships, experiencing poverty or domestic violence. Such women cannot contribute to their communities, the broader society or the economy.

By ignoring young unmarried women, the state simply fails to protect women from the risks that can result from pre-marital sex. In other words, it makes the right to health available only to those who are married. Even simple procedures like the papsmear test are not available to unmarried women in most public hospitals. And the situation can be even worse for unmarried women seeking an abortion. Let me share just a couple of the stories that have come to me through my counselling work, though of course I will not use the real names of the women concerned.

Maria, a young girl from Bandung, was diagnosed with an incomplete abortion. Her doctor advised a D & C (Dilation and Curretage) should be performed immediately in order to save her life. While she was laying in the operating theatre, the doctor found out that she was not married. He decided to cancel the D & C. He stated that hospital rules do not allow staff to perform such procedures on unmarried women without family consent.

Dian had her abortion at 16 weeks of gestational age. This was a very traumatic experience for her. Because she did not have enough money, a clinic in Jakarta referred her to a cheaper place. She was driven by a person she did not know and dropped off on a street where she had to wait for another car. Several other women were in the car, all experiencing the same situation. All had their abortions that evening. Dian had her procedure without painkillers or anesthetics. She was told just to withstand the pain. She remembers that she could hear other women moaning miserably. Before the morning came, she was told to leave. Still struggling with the pain, confused and alone in an unfamiliar place, she had to find her own way home.

We all expect healthcare providers and medical staff to promote our health and protect our lives. Maria and Dian’s experiences show, however, such people often exhibit arrogant and uncaring attitudes towards women in need. Part of the problem is that the lives of women become secondary to the moral judgments enshrined in state policies. Women who are unmarried get shunned, for example. And because the state’s policies fail to provide all women (for instance, those who are more than six weeks pregnant) access to safe abortion services, abortion is driven into the shadows. It stops being a matter of public health and women rights, and is turned into a business. And business without clear regulations or enforcement is exploitative. In the end, women's bodies become commodities that are exploited for profit.