Can US$2 billion buy the Sheikh the Circus of the Sun? With a projected income of close to US$37 billion this year, the oil-rich Gulf state of Dubai is all ready to try.

Like two blades pointed to the skies, the Emirates Towers are unmistakable landmarks in the business district of the Kingdom of Dubai. When they were completed, they stood as the tallest buildings in the world. From the fourth storey, Istithmar looked out to the horizon and in a short span of five years since its conception, became known as Istithmar World. And the world is what Istithmar has set its sights on.

Istithmar World is just one of the investment arms of the Kingdom of Dubai. The most prosperous state of the United Arab Emirates is just over 4,000 sq km in area, but it has become the little (oil) engine that could, with its international acquisitions.

At the helm of Istithmar World is Sultan Ahmed Bin Sulayem who is as much VIP – though unrelated to the ruling al-Maktoums family, he is one of the three key advisers of the Sheikh Mohammed bin Rashid al-Maktoum, Emir of Dubai – as he is Astute Businessman. As the chairman of Dubai World, which owns Istithmar, he was the one that spearheaded Dubai's diversification into one of the world's top ports. And speaking of ports, who can forget the emirate's £3.9 billion (US$6.8 billion) takeover of British Peninsular and Oriental Steam Navigation Co or P&O, bringing under its control 29 container terminals and more controversially, operations in the key American cities of New York, New Jersey, Baltimore, New Orleans, Miami and Philadelphia.

Yes, Sultan Ahmed Bin Sulayem was the man to thank as well for that one.

One P&O shareholder was quoted lamenting how the company was falling into the hands of “Johnny Foreigner”, the collectively derogatory term for peoples, well, un-British. Perhaps the sale of an icon of Britain's former glory as a seafaring empire hit a sore spot that the sale of the Tussauds Group of the wax museum fame did not. Until last March, Dubai had 100% ownership of the world's second largest tourist attraction corporation, including three British theme parks and the great London Eye(sore) before it sold an 80% stake to the private equity group Blackstone for a nifty US$500 million profit.

The emirate, it seems, does have a soft spot for fun as well. The latest rumours to emerge, quickly denied by the object in the view finder, are that Dubai has made a US$2 billion bid for the world-renowned Cirque du Soleil, or Circus of the Sun. 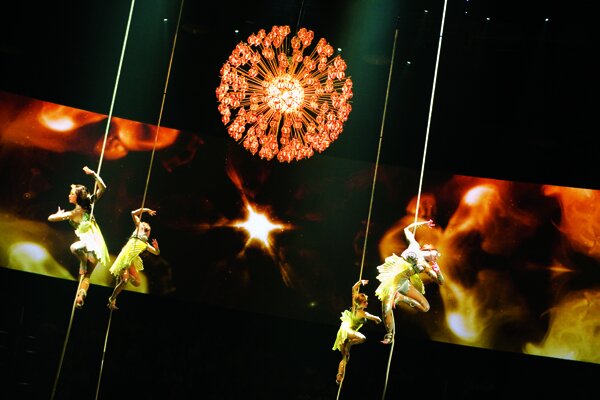 An acrobatic experience of eye-catching colours and jaw-dropping choreography, it had opened for its first show in Dubai in January 2007 for a limited season. Nakheel, the state-owned property company – also headed by Sultan Ahmed – liked it so much that it signed a deal with the show to have a permanent home there, scheduled to open in 2010. Still, this was just going to be another one of the 40 attractions the Montreal-based troupe has worldwide, with its main resident show in Las Vegas, so Dubai has now upped the ante and wants to own the whole company, lock, stock and barrel. The Cirque says it gets frequent bids but maintains that it is not for sale.

Will a simple “no” deter the Sultan? Istithmar is not commenting but consider this. It was from a private conversation he had with Sheikh Mohammed, who wanted more beach fronts, that the manmade isles of The Palm and The World were created. The 70 km of shoreline the Emir had hoped for will by completion of the project, grow to 1,500km.

Our money is on “no”. Watch this space.

It is 100% owned by Dubai World, which is in turn fully controlled by the state.

It is made up of a private equity investment arm, another focused on aviation and a third that finances start-ups.

Its only overseas office is in Shanghai, China.

Among its non-Arab directors is Chief Investment Officer, Laiboon Yu. He used to be Managing Director of Jones Lang LaSalle Singapore, before moving to become Nakheel's former Chief Investment and Financial Officer, where he was credited with raising the largest Islamic bond for the company. Yu reports directly to the group Chairman Sultan Ahmed bin Suleyman.

The Cirque du Soleil was started as a street show by a Montreal performer 20 years ago to mark Canada's 450th anniversary.

Its Las Vegas show plays to more than 9,000 people every night. During its run in Dubai, 100,000 saw the show. Worldwide, more than 9 million have caught its touring performances.

Its annual income is estimated at US$600 million.

Dan-Chyi Chua began her writing career with Channel News Asia, a regional cable network, before forsaking broadcast journalism to hit the road for a three-year sabbatical through the Middle East, China, Central America and Cuba. She has now grounded herself as a writer for asia! Magazine.

Asian Dynasties and History
Conservation of the Environment
Definition: Culture
Economy and Economics
Food and Recipe
Geopolitics and Strategic Relations
Health and Body
Of Government and Politics
Religion and Practices
Social Injustices and Poverty Report
Society, Class and Division
Unrest, Conflicts and Wars

The essential backgrounder to topics covered by theasiamag.com, by subject

Also in this section

AT A GLANCE A quick insight to the top stories

18 years old — and a CEO
Organised crime
Amy Ho: Taiwan's Martha Stewart
How Michael Ying made his billions
Chronicling the fortunes of Esprit

Can a music festival save a rainforest?
Xinjiang’s new female fighters
Homeless and on the run in Pakistan's paradise
Somaly Mam: telling the story of Cambodian women
Peace, when?

From Jerusalem to the West Bank

Israel needs to take a step back and listen to Goldstone about Gaza
Got shame? Do the Netanyahu test.
Here's a riddle: Name one thing Palestinians and ultra-Orthodox Jews in Jerusalem agree on
Is there something we should be doing for the Palestinians?
Could you be any funnier?