Singaporeans rise to the occasion

When it appeared that an anti-gay christian fundamentalism was threatening to take over AWARE, a local women’s rights group, a record number turned up to defend the organisation’s ideals in a rare and dramatic display of civic pride and passion.

When AWARE's Assistant Honorary Treasurer Sally Ang screamed “Shut up and sit down!” to a group of 2,000 women, they greeted her with disbelief and jeers. (President Josie Lau later apologised for the outburst.)

This was to be the tone for the rest of the Extraordinary General Meeting of AWARE, Singapore’s biggest women's rights movement. Its three-week-old executive committee was facing a no-confidence vote, and Ang was one of the six who sat on the stage behind a long cloth-lined table – their only line of defence against the fury of the women (and men) who had gathered to level charges against them.

The executive committee of AWARE that was facing the vote of no confidence. They had been in office for less than a month.

President “Josie and the Pussycats”, as irate bloggers have been calling them (after the comic characters), sat before the audience, staring. They, who had been busily giving interviews to the media and penning letters to local news forums, seemed uncomfortable at this open, face-to-face dialogue. When Lau attempted to say something, she was heckled at. She backed down, and remained largely silent.

That was the moment Lau lost all respect with this reporter. Had she showed any bravado in fighting back to say her piece, she might have restored some esteem in the eyes of those who gathered.

It is worth noting that most of those present were new members. Each had paid S$40 to join AWARE on the day of the meeting itself (membership exploded to more than 3,000, from an average of 300 in the past). They were there to protest against the committee’s anti-homosexuality and sacking of long-serving volunteers and staff, and to vote against it. Ultimately they wanted to protect the organisation. Over the past two decades, AWARE has grown to become the foremost group championing equality for women in Singapore. Many worried that work was now being undermined by Lau and her new committee.

Faced with an assembly brought together by conviction, Lau and her people seemed unable to hold their own. Ang's “Shut up and sit down!” appeared to be the best they could do. In the end, it took an appeal from AWARE founding member, Margaret Thomas, before the crowd would allow Lau to continue with her opening remarks.

If anything, Lau’s actions had so far only shown how ill-equipped she was to handle the challenges of heading a group whose role is to champion women’s rights.

Voted in at an Annual General Meeting of slightly over 100 people, she saw no issue in having her own husband help count the votes. That he was the only non-voter present was her justification.

And when asked if AWARE would extend its help to transsexuals, Lau’s reply was that it would – if they were “battered”.

She maintained that the local Church of Our Saviour was “not involved” in AWARE, even after its pastor Derek Hong had called on female churchgoers to support Lau and her committee. Hong later issued a public apology for having “used” the pulpit to back Lau.

Then there was the appointment of ultra-conservative Christian, Thio Su Mien, as advisor to AWARE, which Lau maintained is “secular”. Thio is the same woman who sounded alarm bells that the organisation was promoting lesbianism.

Perhaps Thio – who is aunt to Lau by marriage – and the new committee she champions have seriously underestimated just how many diverse groups they would offend.

Veterans of AWARE like former president Constance Singam had petitioned for a vote of no confidence against the new committee that they said had “orchestrated a takeover to further their own agenda”.

AWARE founding members and past presidents have come forward, saying they did not think Lau's new committee would uphold the ethos of the group that they had painstakingly built. Moderate Christians lambasted Lau and her committee's fundamentalist values and stealth-like takeover of a secular organisation, which they said had sullied the name of their religion.

Teachers and parents also defended AWARE's comprehensive sex education programme, which Thio criticised as teaching lesbianism to young girls. One Muslim father with three teenage daughters said he would send them for the programme. 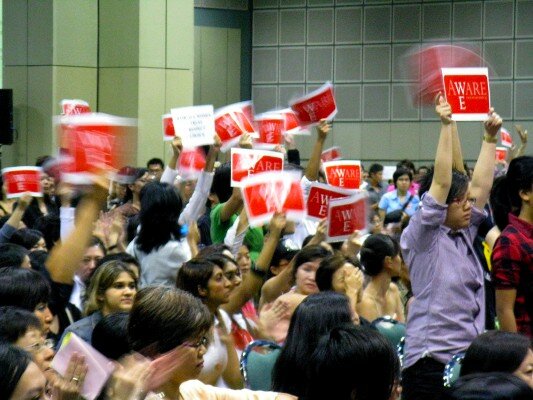 Many supporters of the veterans of AWARE turned up to defend the organisation from an apparently exclusionary stance of the new committee.

There was a steady stream of people who spoke against Lau's committee, but her own supporters maintained a death-like silence, as their woman at the frontline suffered blow after blow. They turned out a decent count of 761 for her in the vote, but it still fell short of the 1,414 those against her got,  eventually decreeing that AWARE had no confidence in their new leader.

Perhaps in the end, there really was nothing to defend about Lau's committee. It emerged – as the votes at the EGM were being tallied – that they had spent S$90,000 in the month that they had taken over AWARE. For a committee that was ready to channel any contentious queries to their legal counsel to be interpreted in the context of the AWARE constitution, this appears unforgivable: the constitution clearly states the committee is limited to an expenditure of S$20,000 per month.

According to the AWARE website, it could have been spent on:

But this was a point Lau's committee missed. Just like when they were asked about the presence of three men in the AWARE centre, a safe haven for abused women. The reply was that they were husbands of committee members.

Lau's committee members may be women, but they have shown how dismally removed they are with the issues and challenges facing their own gender.

A member of the audience declared to Thio: “I am a woman in Singapore and I would not like you to be my mentor.” Thio calls herself “feminist mentor”.

Thio Su-Mien, the self-styled “Feminist-Mentor” of the committee, criticised AWARE's sex education programme for teaching teenagers “homosexuality” is a neutral instead of negative word.

The same could be said for Lau's committee. In the end, after AWARE members voted overwhelmingly that they had no confidence in their leadership, Lau's committee left the room to consider resigning as demanded by the audience.

They were given five minutes to consider, which was extended to half an hour. It soon became clear that they were not returning.

Instead of facing their dissenters with an official announcement of their decision, Lau and her team left office with their tails between their legs.

When forced into a corner, Lau – who had dared to head Singapore's foremost women's rights organisation – displayed an abysmal lack of accountability and courage. This confirmed how wrong Lau and her committee were for AWARE.

With the departure of Lau and her committee, the AWARE meeting proved to be a historic moment for women in Singapore. Their hard-earned victory for greater equality was recognised and upheld by men and women alike. At a time when the onus was on them to step up and defend what they believed in, more than 3,000 AWARE members turned up.

That alone is more than can be said for Josie Lau and her now-defunct committee.

Dan-Chyi Chua began her writing career with Channel News Asia, a regional cable network, before forsaking broadcast journalism to hit the road for a three-year sabbatical through the Middle East, China, Central America and Cuba. She has now grounded herself as a writer for asia! Magazine.

Asian Dynasties and History
Conservation of the Environment
Definition: Culture
Economy and Economics
Food and Recipe
Geopolitics and Strategic Relations
Health and Body
Of Government and Politics
Religion and Practices
Social Injustices and Poverty Report
Society, Class and Division
Unrest, Conflicts and Wars

The essential backgrounder to topics covered by theasiamag.com, by subject

AT A GLANCE A quick insight to the top stories

Bollywood in Pakistan
Biofuel production to expand in the Tropics
10 Eco-Myths Busted
Fascinating Asia by Rail
theasiamag.com at Biofuels Conference 2009

"My Dear Friend..."
A House for Asia
Asia's ancient artforms
Style for a deal
Singaporeans rise to the occasion

Homeless and on the run in Pakistan's paradise
Somaly Mam: telling the story of Cambodian women
Peace, when?
From Persia to the Islamic Republic
Letters to the President

From Jerusalem to the West Bank

The Chinese-Arab connection
Hebron - where the Jews and Palestinians met and parted ways
One way Israeli, one way Arab
There was an old woman who lived in a tent
The Israeli-Palestinian Numbers Game